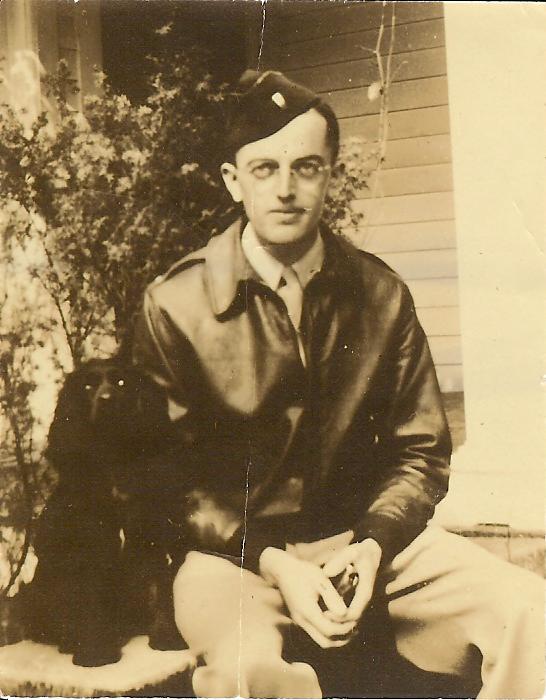 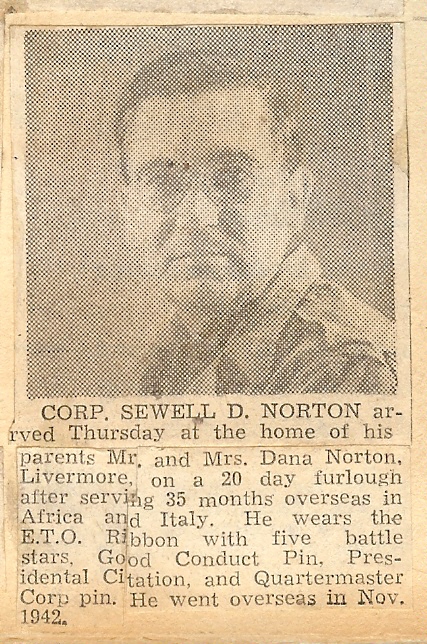 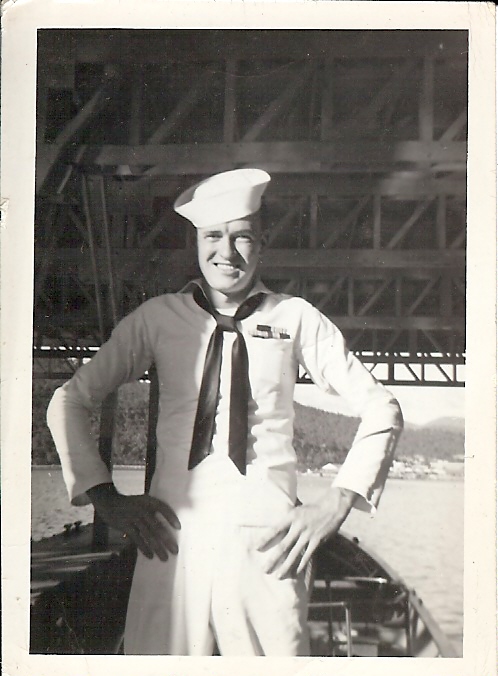 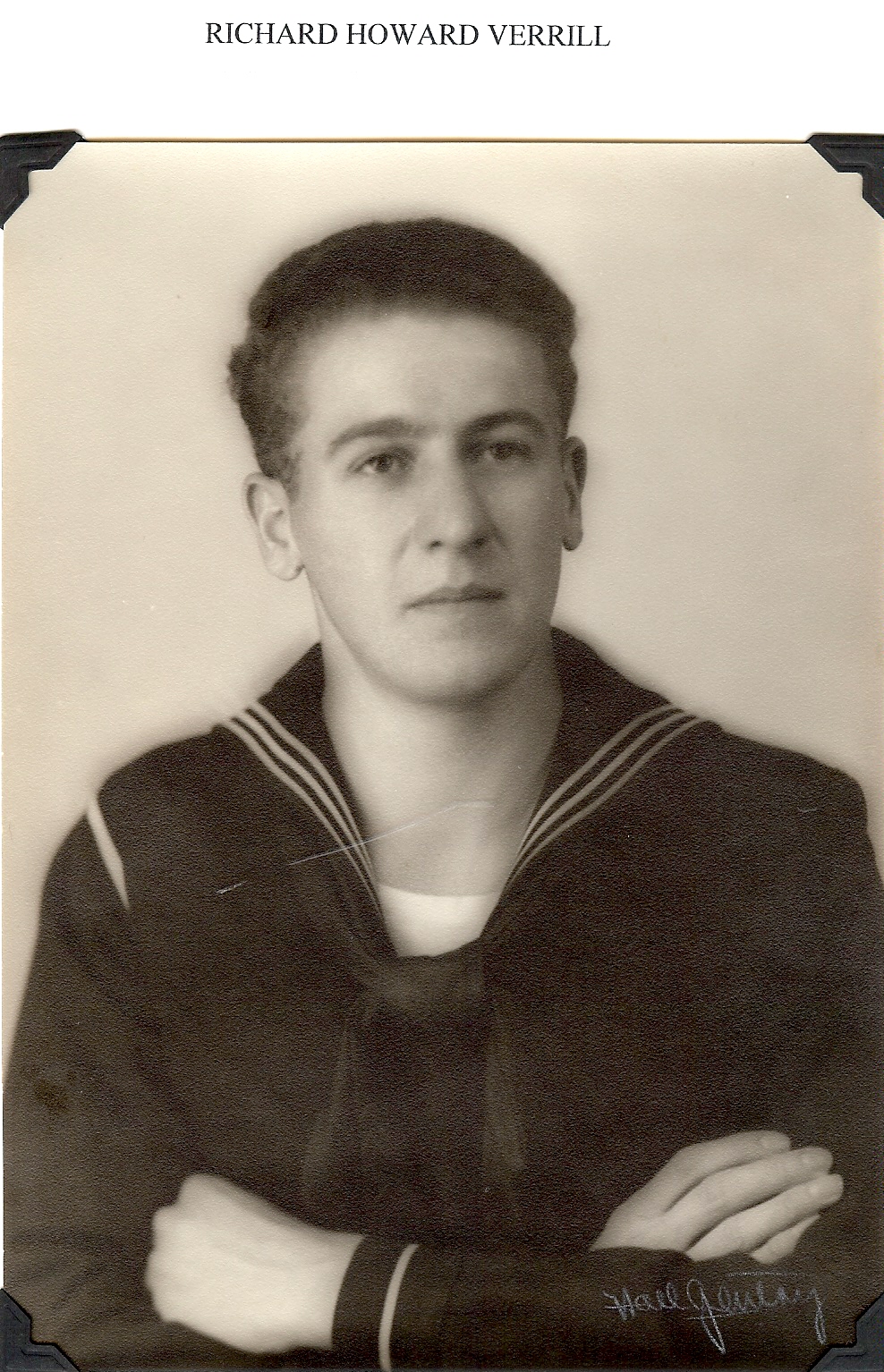 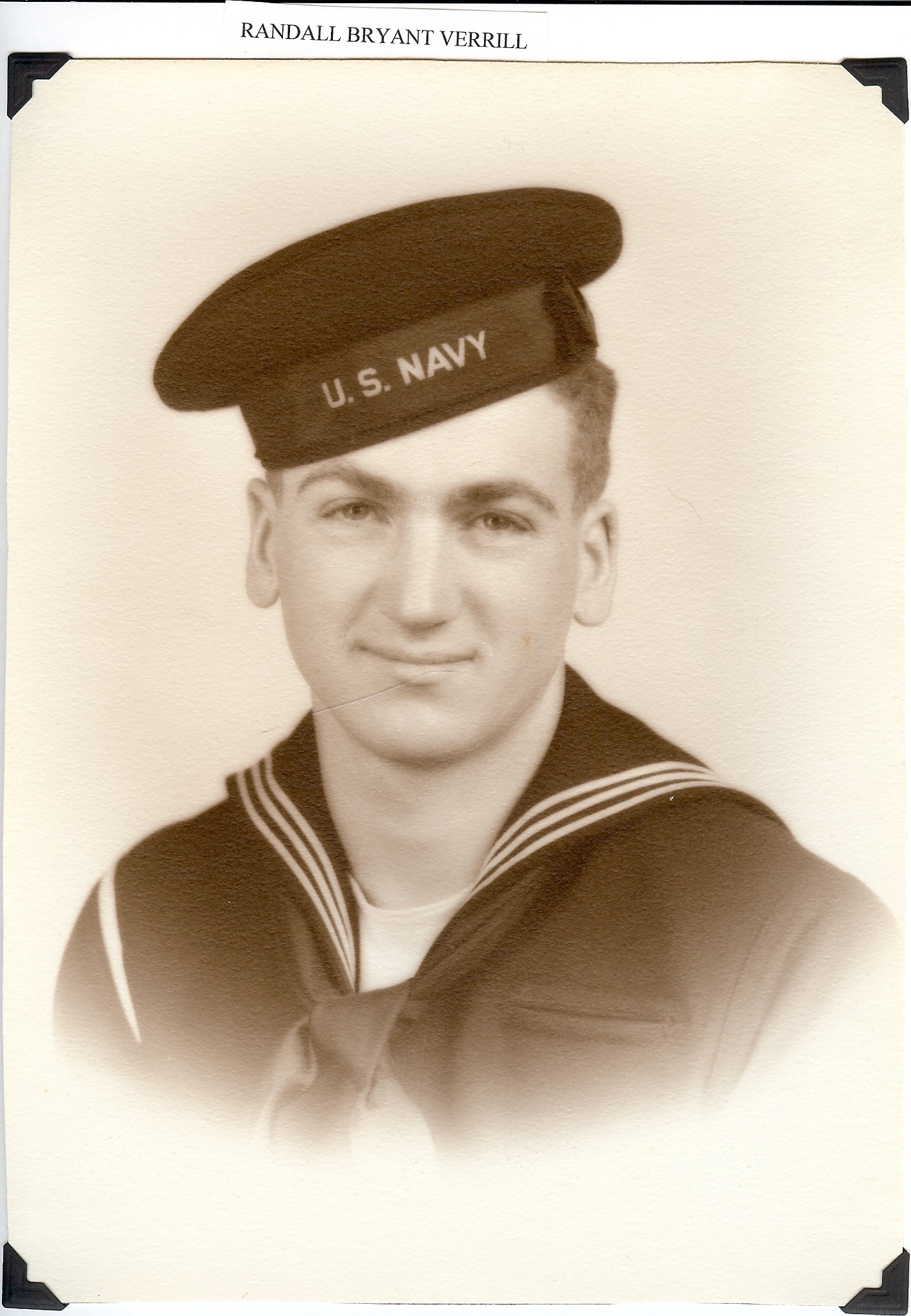 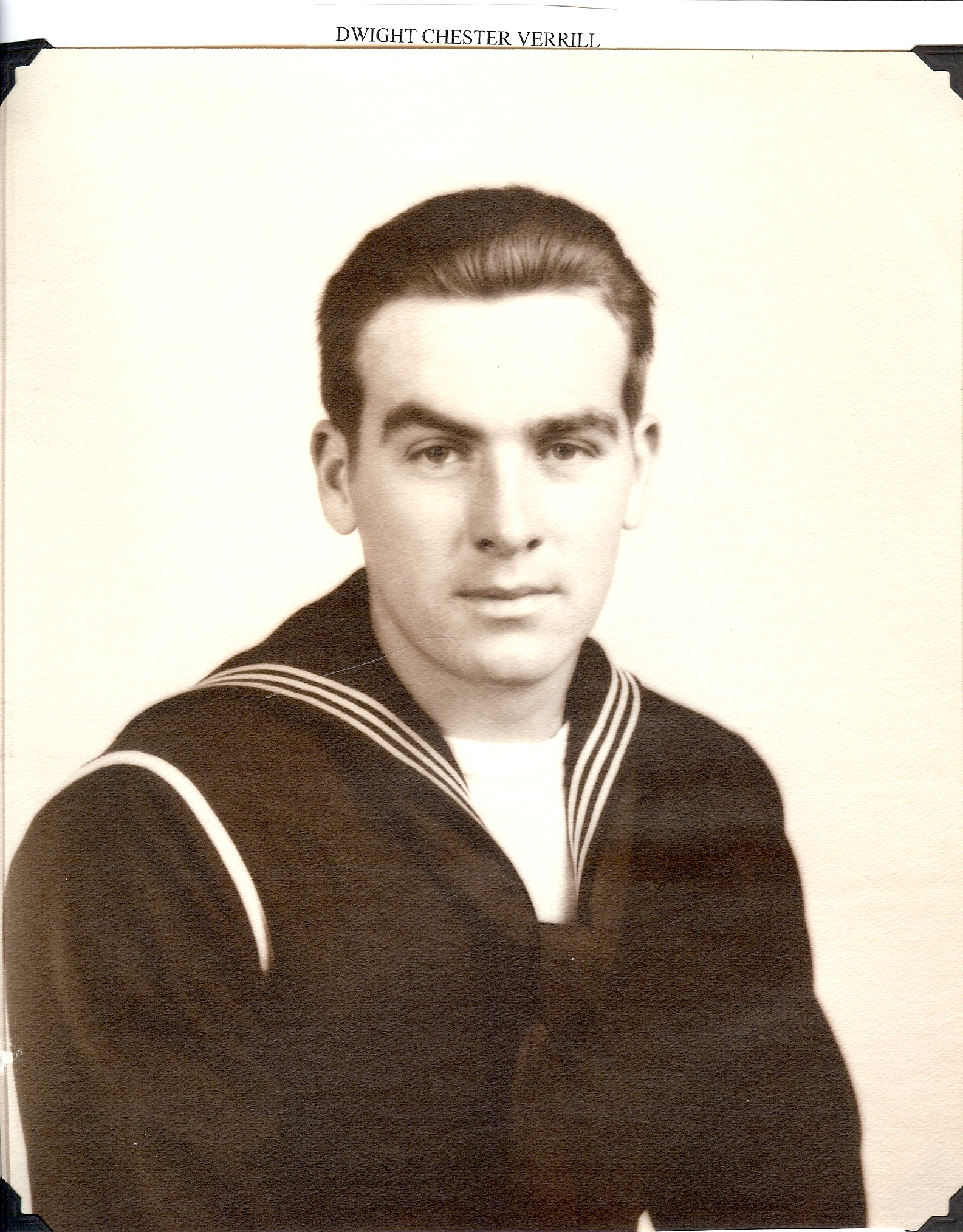 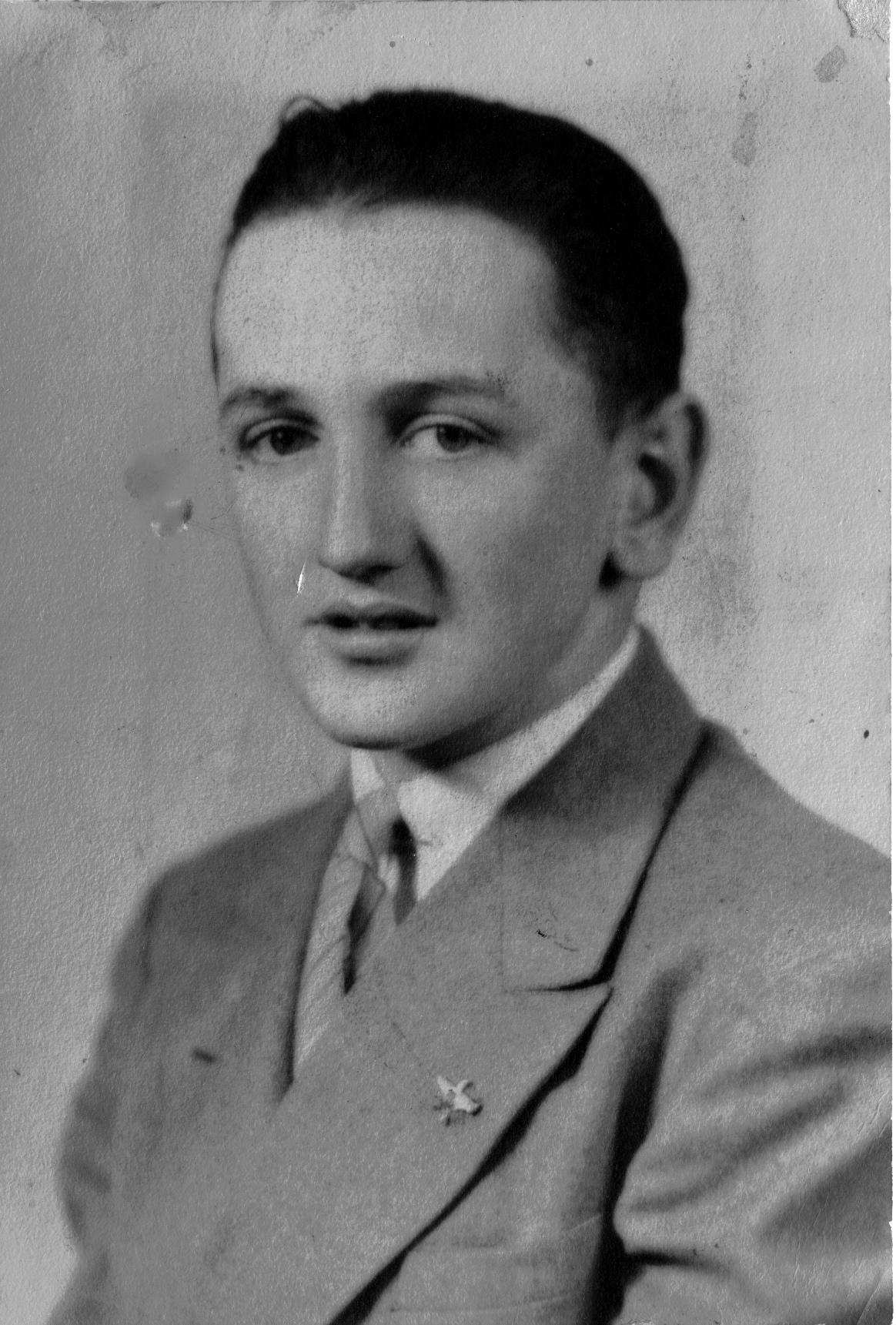 The Timberlake Brothers of Livermore 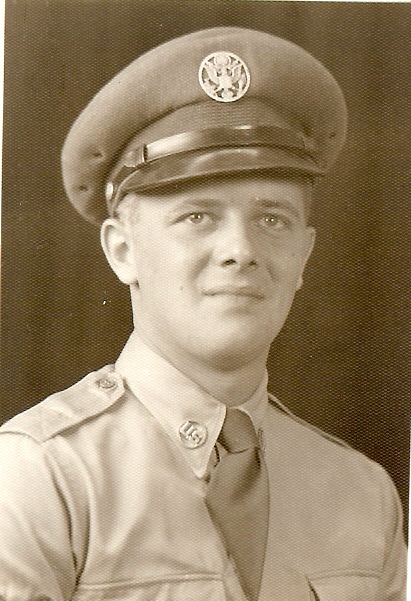 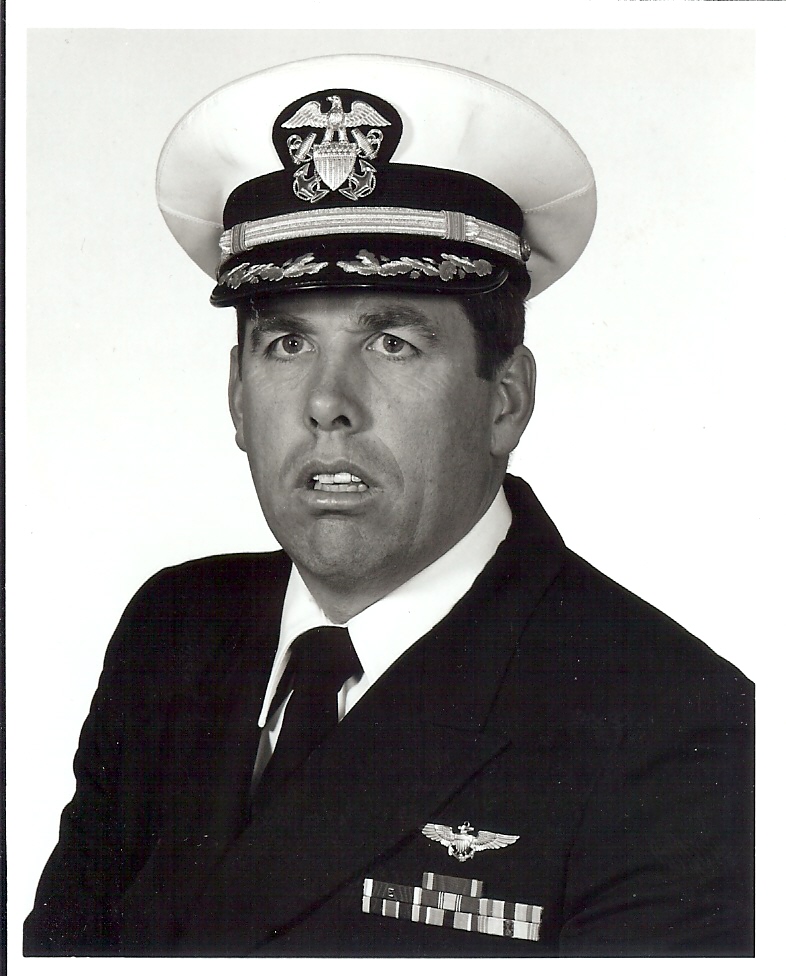 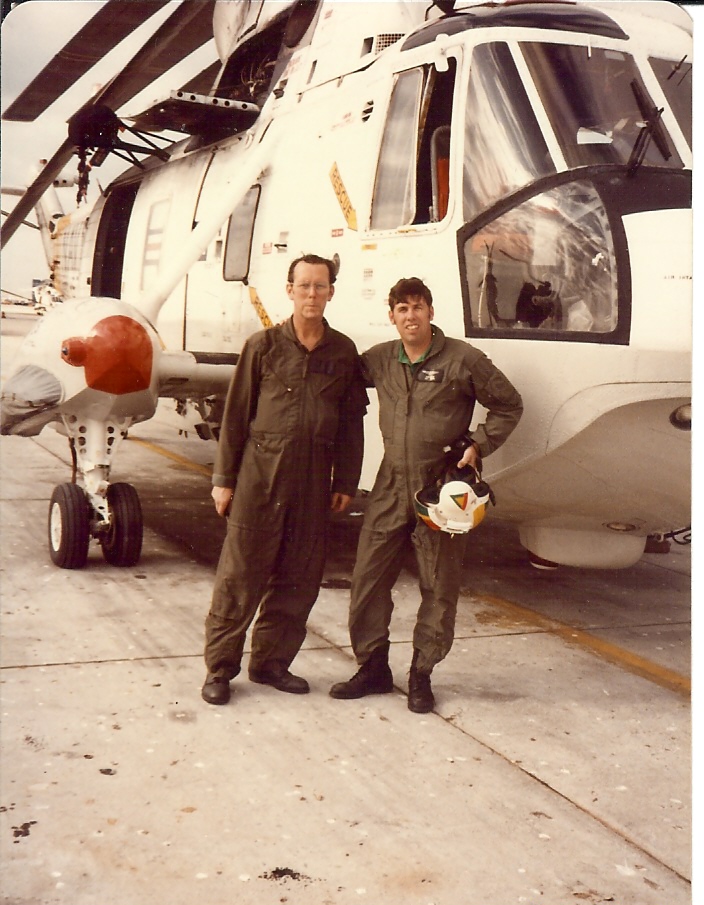 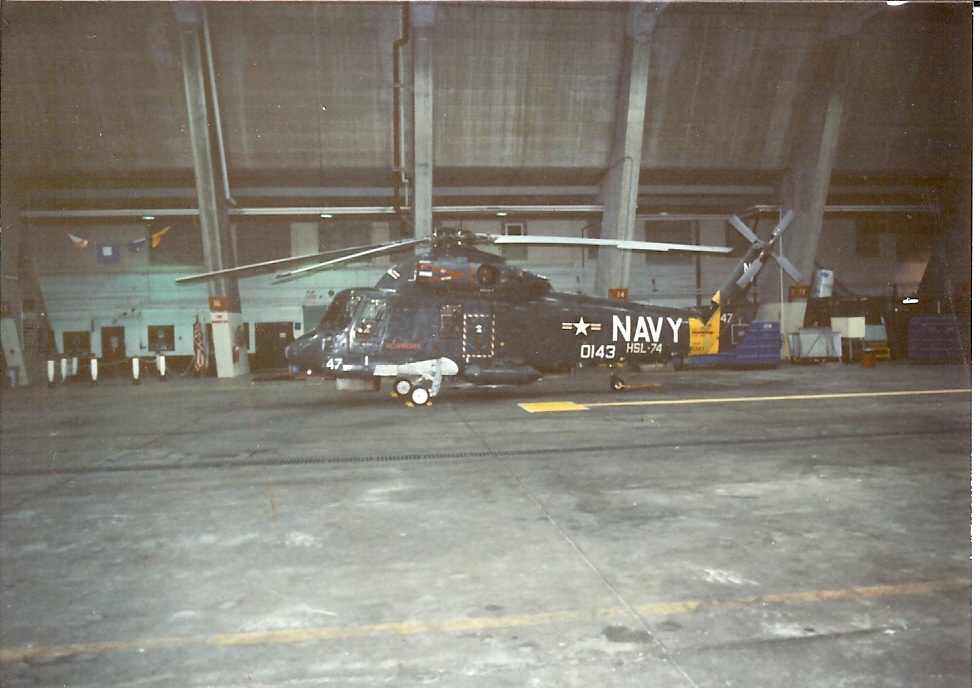 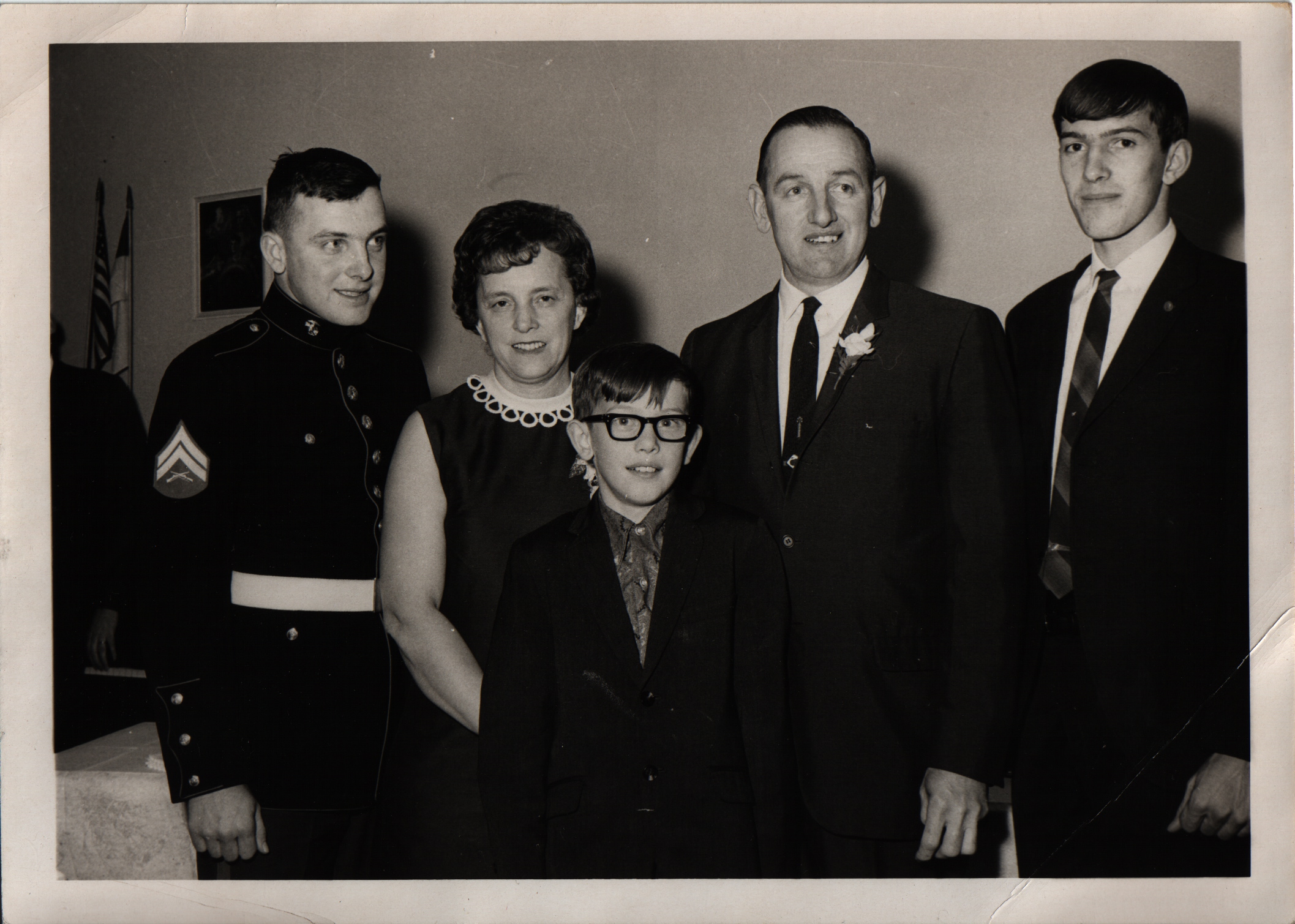 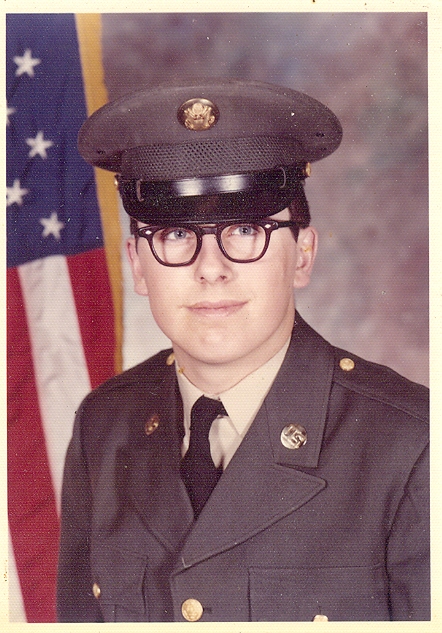 How Dad Got His Purple Heart   (by Kay Berry Oestreich)

We sat in the kitchen of the place at Woodland Lakes, killing time until I drove Dad to his eye appointment.  We often did this, just sitting there quietly, usually reminiscing.  Recently he had had cataract surgery.  Issues concerning his eye and general eyesight lead to the subject of how he lost his left eye in the first place.

He was injured during the war in the summer of 1944 in Southern France.  He had good eye sight at that time, albeit with glasses. In the 550th Battalion, he crossed the ocean on a “Liberty Ship,” the WWII version of no frills transportation.  He had placed his glasses on the metal ledge along the hull of the ship when he went to bed at night.  When they went through the Straits of Gibraltar, there was terrific turbulence and his glasses smashed on the floor.  Little did he know that this may have been a good thing.

They had arrived on the African coast near Oran.  They camped there for over a month.  Finally they were transported by ship to Naples, Italy. From Naples then went by train to Tropani, Sicily.  There they blew up “pillboxes” along the shore.  Then they were transported by train back to Naples and Rome, eventually going by truck to the airfield on August 12, 1944.   He was with three other companies, and his group was the fourth to leave.  The plan was that they would be the “back up”.  The gliders left the airfield about 3 PM on August 15, 1944.  They flew over the Mediterranean, staying about 50 miles off shore, passing  over Corsica and other islands, finally landing in Lamuy, France about 6:30 PM.

The landing was not so great.  It was night when they landed in a grassy field where poles had been driven into the ground here and there.  The air craft did not successfully avoid them.  The left wing hit one pole, and then the right wing hit a pole, and after spinning around they landed up against a third pole, with the two pilots dangling high above his head. Both wings had been completely blown off, and the tail was broken.  The causalities were minimal, Dad having suffered a small laceration on his left check.   He and the rest of the men, 12 in all, got out as quickly as possible.

They contacted the Colonel in charge, telling him that the other three companies were nowhere in sight. The Colonel said that those companies had landed south of town.  Dad and his men were north of town at this time where they were supposed to be.  The Colonel said that the General, stationed on a ship in the middle of the Mediterranean, was calling the shots.  Dad told the Colonel that he remembered the map of the area, and that there were other (British) forces around there, but the General ordered  them to march toward town, and hold it.  By the time that they got started, they were walking down a road in total darkness, hardly able to see the guy in front of them.  Suddenly, fire rang out from a machine gun.  Dad was in the front, leading his men.   He said that he put his hand up to break his fall to the ground.  He was hit badly in the face and his hand was black from bits of shrapnel.  (Luckily he was not wearing glasses which would have been made of real glass at that time.  No telling what the glass shards might have done.)  In time he would find out that indeed there were British soldiers between where they landed and town, and the mess they got into was “friendly fire.”

There were medics with him, and he was taken to a field first aid station.  He had been shot in the head and face, and eyes.  He could not see, and had bandages about his head.  He was at this field station about three days before being transported back to Italy by train.  There was little food and drink at the field hospital, but he said that they had good medical treatment.  When in Italy, he was in a hospital, a converted  brick building  that “looked very much like my old high school.”  He received some treatment there which was penicillin shots and morphine.  After a few days, he began to see light with his right eye.  Up to this point, he had been totally blind for two weeks. It was then that he noticed that his hands, especially his left, was black from bits of shrapnel.

In time he was put on a ship back to the states, only to be held up by the Hurricane of ‘44. They had to ride out the tail of the storm.   For three days he said that everything in the ship went from side to side. At one point when the first mate was at the helm, the ship went to a 42 degree list for about fifteen minutes, and men were falling out of their bunks.  He was in a hammock, and at one point, he let the clips go, and swung freely, only to hit the wall really hard. He told me “lucky I didn’t break my arm.”  Pots and pans and everything else went flying. There was little food other than egg sandwiches, as that was all that the cook could make.

He went back to the states,  where he landed at Charleston, South Carolina.   He said that he had to go back to his original camp.  He was put on a train to  Fort Devens, Massachusetts sometime in late September 1944.  He was not sure of the time frame, but said that he remembered on his anniversary, which would have been September 2, the ship was passing the Straits of Gibraltar.  All in all, it had taken several days to cross the Atlantic.

I asked him if Mother came to visit him, and  he said that she did.  I got the impression that he had a couple of visitors.

While in Massachusetts, his left eye was very infected, and because it was not responding favorably to medical treatment, it was drained.  He said that after that he felt much better.  (I had seen the medical report at an earlier time.)  He was fitted for an artificial eye.  He mused “I had that eye for 30 years.” (before a replacement.)  A side note here:   Early on his first eye was made of glass.  It lasted only a few weeks.  He accidentally dropped it in the sink and it shattered.  His second eye was made by a dentist in Massachusetts.  This one was made of synthetic materials  (plastic), and this was very new technology at the time.  This is the one that lasted 30 years.

Finally in December he was released for a weekend pass  and made it home via bus.  I had heard this part of the story before from Mother.  They knew that he was coming and had been waiting, in fact Mother said that she had been waiting down at the end of the driveway at the Farm, but that it was very cold and she had gone back inside.

Mother told me the story that Dixie began barking and that is how they knew that he was home.  Dixie, a black cocker spaniel, was said to have jumped up to his shoulders in excitement.  Dad said that he was so happy to see the dog!  He told me that “That dog knew how to salute.“  He also said that he remembers seeing me with my new little teeth sticking out.  He probably had not seen me for over six months.

Dad was not completely released medically until February 1945.  He went back and forth from North Livermore, Maine to Fort Devens, Mass. several times from December to February.

This story was prompted by the fact that at 90 years of age, Dad had a cataract removed from the right eye, the only eye.  His vision six months ago was 20/200 and now is 20/40.  He does not need glasses for the first time in 80 years, except for reading.  The doctor who removed the cataract saw the bits of shrapnel during the surgery, but decided not to be a hero and try to remove any of it.  He decided to let well enough alone.

But Dad was a hero in many respects, but he received the Purple Heart for being injured.  He has two medals, in fact, as a second one was sent to him years later!!

Back to Rockwood Berry